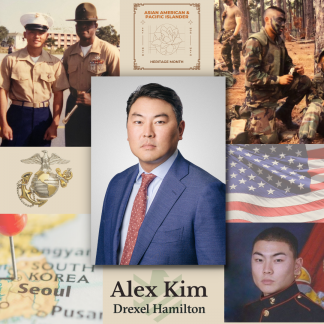 May 19, 2022 — As we celebrate Asian American and Pacific Islander Heritage Month, we’d like to take the opportunity to highlight one of Drexel Hamilton’s Managing Partners and military veterans, Alex Kim. Beginning in South Korea, to the Garden State, into the United States Marine Corps, onto Wall Street and up the corporate ladder, Alex’s journey exemplifies the American dream.

Alex was born in the capital city of Seoul during the time South Korea was in a state of transition from authoritarian rule to democratization. Recognizing the economic opportunities in America, Alex’s parents immigrated to the United States with him when he was two years old. After first living in Queens, NY, the family of 3 settled in Edison, New Jersey. Alex’s parents easily found employment which ultimately led to a successful career in real estate. Growing up as a minority in Edison at the time had its challenges and upon graduating from high school, Alex decided to enlist in United States Marine Corps in hopes it would give him focus and discipline. There he received rigorous training, served as a Rifleman, gained a myriad of skills and experience, and emerged from his military years “a different person.” He went on to earn a degree in Finance at Rutgers University, an achievement Alex attributes to his time in the Marine Corps, commenting that he would not have made it to college if not for his military service.

With a diploma in hand, he set off for a career in residential and commercial mortgage originations encompassing the New York and New Jersey area. After experiencing every facet of the mortgage business pre-and post-2008 crisis, he set his sights on Wall Street. In 2013, Alex joined Drexel Hamilton in Securitized Products Sales and Trading desk with a focus on Commercial & Residential Mortgage Backed Securities. After only five years, he took over leadership of the desk and became a Managing Partner of the firm.  During his time at the helm, Alex has led Drexel Hamilton to become the #1 ranked Co-Manager in the CMBS league tables among many other accomplishments. Unsurprisingly, his personal motto is “All in.”

It’s a privilege and pleasure to work with and for you, Alex. Thank you for all you do for Drexel Hamilton, the excellence you consistently deliver to clients, the mentoring, and your continued service to our Veteran community.