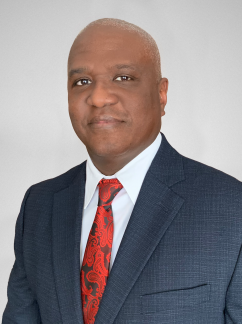 Lieutenant Colonel (LTC) Kelvin Hart began his military career in the United States Marine Corps (USMC) with assignments that included the Training Allowance Pool, Okinawa, Japan, and the 24th Marine Expeditionary Unit culminating in a tour in support of Desert Storm/Desert Shield and Operation Provide Comfort. LTC Hart transitioned off active duty to the USMC Reserve promoting to the rank of Staff Sergeant.  He then embarked on a career in the United States Army serving with the 274th MP Company. LTC Hart earned his officer commission through the Army National Guard Officer Candidate School and was then assigned to the 33rd Weapons of Mass Destruction-Civil Support Team as the Nuclear Medicine Science Officer (NMSO). He held many other positions including Recruiting and Retention Battalion Commander, Brigade Intel and Operations Officer, Covid-19 Response Task Force Commander and Chief of Staff for Operation CAPITOL RESPONSE I and II and the Presidential Inauguration.

Prior to joining the District of Columbia National Guard, LTC Hart worked as a Laboratory Associate with the National Heart Blood and Lung Institute (NHLBI), National Institutes of Health working on various research projects to include gene therapy and liposomal therapy.  Additionally, he served as a Chemical Patent Examiner for the U.S. Patent and Trademark Office.