July 25, 2022 – Today is National Hire a Veteran Day! Drexel Hamilton, Wall Street’s only 100% military veteran-owned and operated investment bank, is singularly committed to mentoring and hiring veterans for a meaningful career in Finance. The proof is in the pudding. 10 of our 11 new hires in 2022 to date are military veterans and 50% are veterans from underserved or underrepresented communities.

On a day that serves to underscore the many transferable skills that veterans bring to the civilian sector, we are thrilled to introduce four shining examples in Drexel Hamilton’s newest military veteran hires: 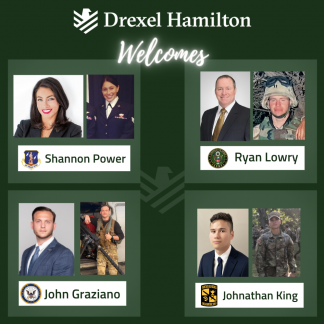 Ryan Lowry – Ryan is serving as Drexel Hamilton’s Specialty Finance Director. After graduating from the United States Military Academy at West Point, Ryan served as an US Army Infantry Officer in 1st Cavalry Division at Fort Hood and deployed to Iraq. Along with a US Army Ranger Tab, US Army Parachutist Badge, and US Air Assault Tab, Ryan holds a MBA in Finance and Global Economics from the NYU Stern School of Business.

Shannon Power – Shannon, an analyst on our Money Market Funds team, serves in the Delaware Air National Guard with the 142nd Aeromedical Evacuation Squadron. She deployed to Qatar in support of Operation Freedom Sentinel and holds a degree in Business Management & Marketing from the University of Mississippi.

John Graziano – John, an intern with our Debt Capital Markets team, is a transitioning U.S. Navy Aviation Rescue Swimmer with six years of active duty experience. He deployed in support of Operation Enduring Freedom and Operation Freedom Sentinel, flew over 800 hours in MH-60S helicopter, and is a qualified Crew Chief and Aerial Gunner.

Johnathan King – Johnathan is serving as an intern on our Equity Capital Markets team. He is in his last year at Rutgers New Brunswick pursuing a degree in Finance with a minor in Military Science as an Army Reserve Officer Training Corps Cadet.  While also the President of Rutgers New Brunswick Army ROTC, Johnathan serves in the New Jersey National Guard as part of the 44th Infantry Brigade Combat Team.

We are excited to have each of you on the Drexel Hamilton team!