New York, NY – March 29, 2022 – Today we pause to pay tribute to our Vietnam War Veterans and their courageous service to country. Our gratitude runs deep for each and every one and particularly for our very own at Drexel Hamilton including Chairman & Founder and United States Marine Corps (USMC) veteran, Lawrence Doll, who received two Purple Hearts, the Vietnamese Cross of Gallantry, and a prestigious appointment to the USMC Honor Guard in Washington, DC., as a result of his bravery in the Vietnam War. This year, we are highlighting our Vice Chairman Roger Elsas, who joined the U.S. Navy in 1965 and earned his officer commission in Newport, Rhode Island, at the Navy’s Officer Candidate School. After graduating from the Navy Submarine Training School in New London, Connecticut, Roger reported aboard USS Tigrone (SS 419), a late WW2 Tench-class submarine. 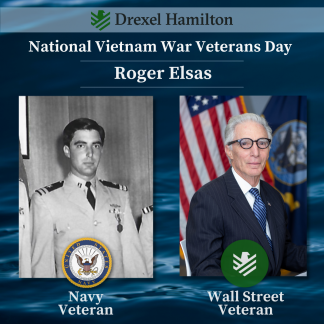 With multiple deployments under his belt, Roger volunteered for Vietnam and was assigned to the Navy’s River Patrol Force, Task Force 116, where he quickly found himself at the heart of Vietnam’s Mekong Delta in support of Operation Game Warden.

A “blue water navy” submariner now part of the “brown water navy,” Roger braved the extensive maze of rivers and canals that wound their way through Vietnam’s dense landscape on a 4-man, 31-foot River Patrol Boat equipped with two 50-caliber machine guns forward, a 50-caliber machine gun aft, a 7.62mm machine gun and a rapid fire 40mm grenade launcher. One of five divisions patrolling different sections of the Mekong Delta, Roger and his shipmates’ mission was interdicting the Viet Cong (VC) infiltration of South Vietnam, denying VC use of the inland waterways for transporting guerrillas and supplies.

Task Force 116 effectively achieved its objectives, earned the Presidential Unit Citation, and made Operation Game Warden one of the most successful U.S. Naval actions during the Vietnam War. Upon returning home from combat, Roger was granted duty on a submarine going into the Philadelphia Naval Shipyard. There he served his last several months in the Navy in reach of New York City where he had his eyes fixed on a career on Wall Street and where he soon got his first post-Navy job…and the rest, as they say, is history! We are beyond honored to work with Roger, the finest of military veterans and Wall Street veterans wrapped in one. Our most heartfelt thanks for your and Lawrence Doll’s selfless service to our nation.