March 22, 2022 – What a privilege to sponsor and take part in the 25th Annual Rainbow PUSH Wall Street Project Economic Summit! Drexel Hamilton has had the honor of 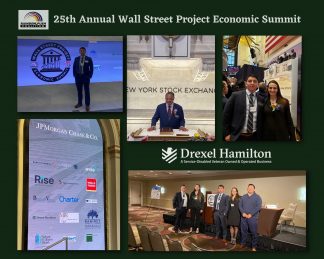 partnering with Rainbow PUSH Coalition for several years now. This great organization, founded and led by international civil rights leader, Rev. Jesse L. Jackson Sr., continues to make unparalleled strides in advancing equity and inclusion around the world. Drexel Hamilton Director Melissa Fay commented, “We were humbled to have been at this year’s Rainbow PUSH Wall Street Project Economic Summit in the presence of legends. Drexel Hamilton has supported the Rev. Jesse L. Jackson, Sr.’s vision over the years and were proud to celebrate the 25th anniversary of the Rainbow Push Coalition – Wall Street Project, which has paved the way for qualified minority, woman, veteran and disabled-owned financial services firms to have a seat at the table. We learned that Reverend Jackson was the person who influenced the closing of the NYSE in support of the MLK federal holiday each year, showing the power of Corporate America to drive change.”