March 8, 2022 – At Drexel Hamilton, we love to take part in issuances that advance environmental stewardship and protect public health. The front page article in Thursday’s The Bond Buyer includes one such recent transaction we executed for Miami-Dade County where rising sea levels are a critical issue due to extensive ocean and bay coastal exposure. As part of Miami-Dade County’s “Sea Level Rise Strategy”, a Drexel Hamilton sole-managed 30-year municipal bond was issued for the northern 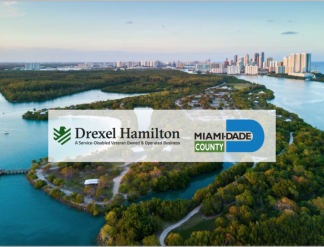 part of the county along the Oleta River. This natural river with a 7-mile shoreline considered a “vestige of wilderness in a matrix of urbanization” drains the northern Everglades into Biscayne Bay. In coastal areas, rising groundwater floods properties from underneath causing septic tanks to fail and, in this case, would result in contaminants leaking into Oleta River and Biscayne Bay. The bond’s proceeds will fund septic to sewer projects that will prevent this as sea levels rise and thus protect Biscayne Bay and the public health of county residents. Drexel Hamilton’s Director of Municipal Finance Roger Anderson said, “It was a privilege to serve Miami-Dade County and its citizens by completing such a successful transaction. We’re honored to have been given the opportunity to sole-manage and are very much looking forward to working with the County again in the future.”