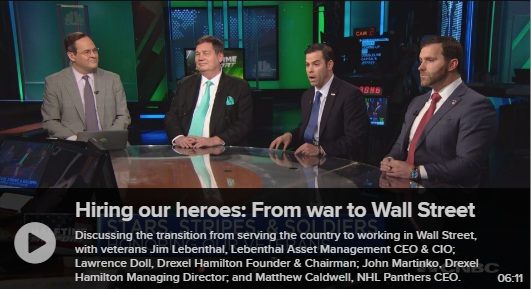 Hiring our heroes: From war to Wall Street

View the video on CNBC

A Wall Street firm is giving service-disabled vets an opportunity

It was on his last mission, when he was working for the psychological operations division in the US Marine Corps, that his vehicle ran over a roadside bomb.

His body was on fire, and when he got out of the vehicle he was shot four times. One-hundred percent of his face and 37% of the surface area of his body was burned, he lost both ears, his nose, and some fingers, and his abdomen and intestines were ruptured, among other injuries.

He spent 22 months in a hospital and has endured 74 operations and counting.

When he finally retired from service in 2007, he said in an interview with Business Insider, his wife left him, and he became a single father of three children and $1.3 million in debt.

He didn’t think he would have trouble finding work. He had received a degree in finance with a 3.98 grade-point average and had a decorated military record. Getting interviews proved to be difficult, however, and when he was invited in, he said, “the interview was over even before it started.”

“I was really motivated, but nobody would take me seriously because of my injuries,” he said. “To feel forgotten was very painful.”

Matt Murawski, a soft-spoken veteran from Georgia, had a lot of responsibility on active duty. He was in charge of 120 soldiers, 20 artillerymen, 15 US contractors, and 500 Afghan soldiers whom he was mentoring to take over security in the area. He was also in charge of mentoring the mayor, judge, and police force of a small town in the mountains of Afghanistan.

US Army vet Scott Smiley is blind in both eyes from an explosion in Mosul, Iraq. He has a master’s degree from Duke University and completed an Ironman long-distance triathlon in Hawaii against all odds. He too, wasn’t able to find work after leaving the Army, saying “nobody would hire him.”

Drexel Hamilton wants to change that.

The broker-dealer Drexel Hamilton was founded by a disabled veteran named Lawrence Doll in 2007. Doll served in the Vietnam War in 1968 and 1969 and was seriously wounded while he was there. “It was a difficult time,” he said in an interview with Business Insider, “because the country was mostly against the war in Vietnam. But people helped me — and I never forgot that.”

He, in turn, wanted to help veterans who were returning from Iraq and Afghanistan, especially the injured ones, as he knew they had a difficult time finding work. Read More