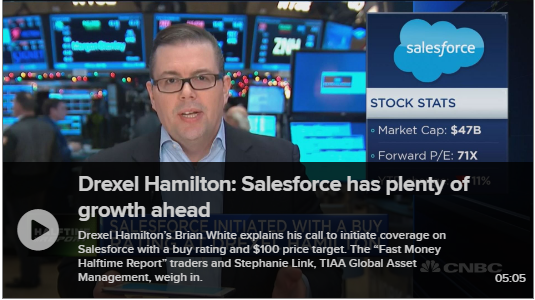 Salesforce is in a better place than ever, analyst says

Salesforce.com is in a “phenomenal position,” according to a Wall Street analyst that initiated coverage this week.

Salesforce’s shares have dipped nearly 11 percent so far this year, as the company’s mergers and acquisitions activity generated a flurry of headlines. In addition to a hefty acquisition of Demandware, vocal CEO Marc Benioff also briefly eyed deals with LinkedIn and Twitter.

Drexel Hamilton analyst Brian White told CNBC’s “Fast Money: Halftime Report” on Tuesday that he sees upside to the stock, in part because the company is smart about knowing when to build technologies versus when to buy.

“They’re trying to broaden their reach, and there’s nothing wrong with that,” White said. “I don’t view it as a negative thing. It’s not like, ‘Oh my God, they’re doing a lot of acquisitions, and that’s because they can’t find growth.’ That is absolutely not true. What is true is there are some phenomenal assets out there that are for sale.”

To be sure, not everyone agrees, especially when it comes to Benioff’s desire to tie-up with Twitter.

“This would be a disaster,” Joel Fishbein, managing director at BTIG, told The New York Times in October of the potential of a Twitter-Salesforce deal. “Benioff is a visionary, but this could blow up. Engineers could leave Salesforce, and it would send the stock down 30 or 40 percent.”
White initiated coverage of the cloud software company this week with a $100 price target, a hair above the $95.24 consensus of analysts surveyed by FactSet. Salesforce is still a relatively new player for enterprise technology in the burgeoning cloud space, White wrote in a research note.

“Being a ‘teenager’ reminds me of Oracle and Microsoft as they were starting to emerge in the late 1990s,” White told CNBC. “I think [Salesforce] is positioned better than ever. The scale is there.”