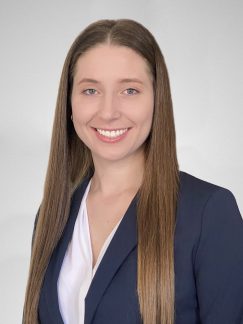 Alissa started at Drexel Hamilton in May 2021 and currently works as a Debt Capital Markets Analyst, while she completes her undergraduate degree at Columbia University in New York City. Alissa served as an Intelligence Analyst in the United States Marine Corps from 2015-2020, achieving the rank of Sergeant. She was stationed at Marine Corps Base Camp Pendleton in southern California and served in Third Battalion, Fifth Marine Regiment. She directly supported female integration into formerly all-male combat units, as one of the first females at the unit. Alissa deployed to the South China Sea and Arabian Gulf, stopping in India, Qatar, Saudi Arabia, The Philippines, Japan, and Guam as part of Battalion Landing Team 3/5 on the 11th Marine Expeditionary Unit. She also served in 1st Marine Division, Headquarters Battalion. Alissa is originally from Waterford, Wisconsin.